Conor Pass is one of the highest passes in Ireland. It's on the road between Dingle Town and Cappatigue.


A twisty one-lane asphalted road leads to the pass. The drive, inadvisable in bad weather, is considered one of the most beautiful of Ireland. The scenic road leading to the pass weaves its way around the sharp cliff faces and past high corrie lakes. Vehicles over two tonnes in weight are prohibited from using the road in order to avoid difficulties in passing.

When we told Rory Brosnan that we were going to drive over Conor Pass that afternoon he told us about Pedlers Lake above the waterfall that is just north of the Pass. We had stopped at the waterfall before but not realized that Pedlers Lake was above us.

Pedlers Lake was created at the top of Conor Pass by a glacier as it slid down the mountain. It drains into the waterfall that we had seen before.

Pedlers Lake was a perfect place to let a 6-year old unwind.

The one lane, blind, hairpin turns weren't quite as scary the second time around!

The Irish Tourism site is here and the wikipedia article is here. 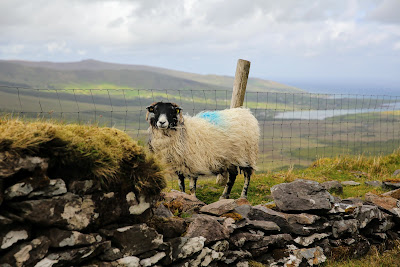