In Place d'Armes directly in front of Château Frontenac is Monument de la Foi (Monument of the Faith).

The park drops downhill from Château Frontenac to Rue Sainte-Anne and provides a shady spot to rest and soak in the activity. 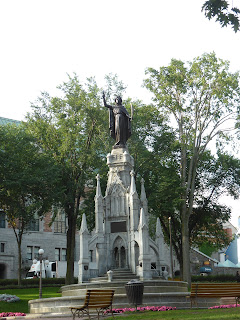 We took lots of photographs of the landscaping surrounding Monument de l'UNESCO but they don't really do it justice. The park crests a small (for Québec City) hill and the ground falls away from the photographer standing on ground level. This would be a perfect opportunity for a drone. 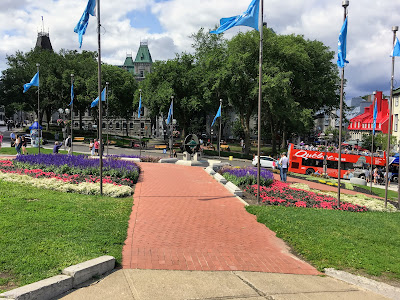 On the short walk to the neighborhood grocery store I came across Monument aux Communautés Religieuses Enseignantes.

It's in the middle of a tiny roundabout (I told you Québec City feels like Paris).

The houses surrounding it remind me of a village outside of Lyon. 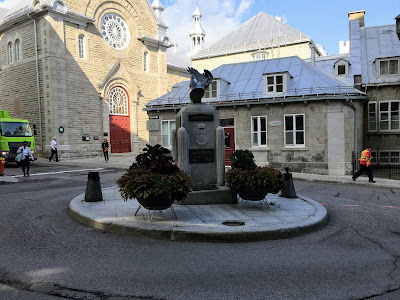 Near the Chateau Frontenac is Monument Samuel-De Champlain. Champlain was the founder of Québec City. Often there are street performers there that draw a crowd. 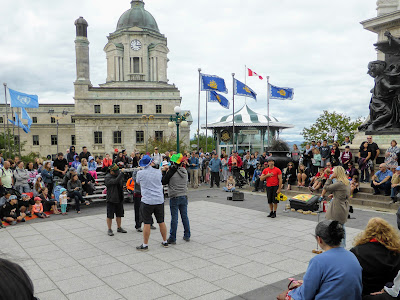 Château Frontenac is an icon of Québec City. It rambles across the highest point of Vieux-Québec and is visible from all over town.

Its very presence creates a focal point for activity and excitement in Vieux-Québec.

While we were in town there was an exhibit of  Salvador Dalí artwork in the Château Frontenac.

We can only afford to eat crème glacée there. Maybe next time. 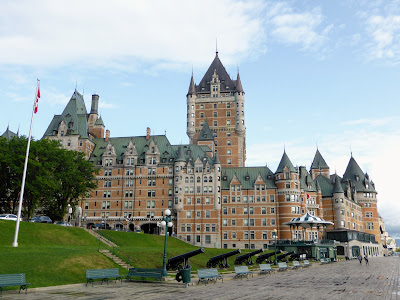 Terrasse Dufferin is an expansive wood plank walkway that wraps around the Château Frontenac towards the Citadelle, overlooking the St. Lawrence River. It's full of gazebos and benches and interesting people. I took my walk here each morning.

Beneath sections of the terrace are the remains of Saint Louis Forts as well as Château Saint-Louis, residence for French and British Governors. Admission is free. 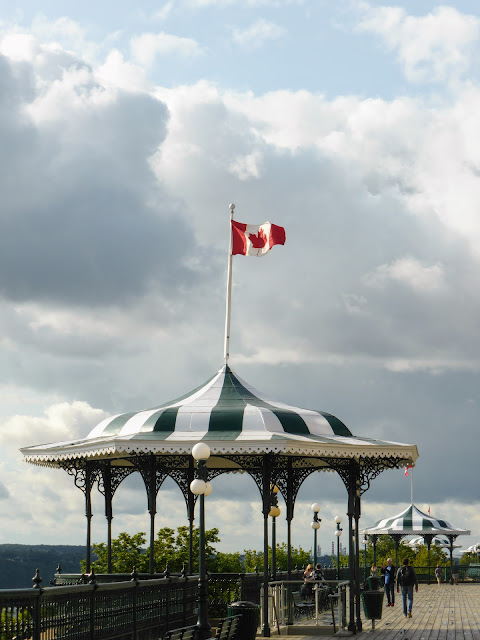 This was our first Airbnb experience and we were thrilled.

Old Quebec Airbnb was really nice. It was built in 1654 but has been remodeled since then. The millwork is awesome. The door locks are still the old metal latches. Our apartment was on the 2nd floor (US counting) and there's one above it. We heard occasional footsteps and noises but there was never a problem. The first night we kept hearing a irregular beeping like a truck backing up. Turns out it was the Québec flag squeaking on its post just outside our window.

You can park in the Hôtel de Ville parking garage but the entrance to was hard to find as the street (Rue Pierre Oliver Chauveau) was closed (just drive around the signs). When you exit the garage at the Rue des Jardins exit you are directly across the street from the apartment.

The Airbnb host owns a couple of shops downstairs, a gift shop (Le Sachem) and a coffee shop (La Maison Smith). The coffee shop also has wonderful pastries and we had breakfast there each morning.

Just down the street was a little neighborhood grocery (Epicerie Richard, 15, Rue du fort) that has enough of a selection to get you by. It also looks so typically Québec.

All the appliances were fresh stainless. There wasn't a dishwasher nor an ice maker but we weren't planning on washing dishes anyway. The washer and dryer were nice to have and we used them.

The Wi-Fi is the gift shop's business network so its speed is good, 10+ Mbps both ways, but only reaches the living room. In the bedroom you can sometimes get the guest network from the coffee shop.

We visited in late August and the temperatures were never above the high 60s. On one day and night the apartment was muggy. There is a small section of each window that will open and there are fans. 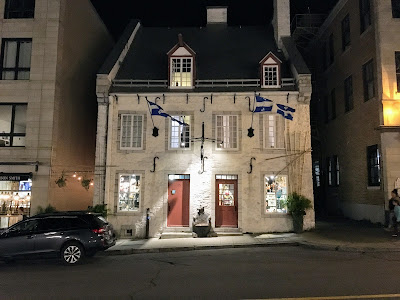