We wanted to get the perspective of Mt. Desert Island from Frenchman's Bay. We found Acadian Boat Tours Sightseeing/Nature Cruise. It's a 2 hour cruise that sails 3 times a day. They also have a shorter 1 1/2 hour cruise if you're crunched for time.

You can buy tickets at their gift shop at Sea Dawg Gift Shop at 47 West St. or at their boat location at 119 Eden St. (Atlantic Oceanside Hotel). The Atlantic Oceanside Hotel is just over a mile out Route 3 so you'll probably want to drive. There's plenty of free parking but realize that it's at the top of a pretty good hill. The free Island Explorer shuttle bus stops there as well so that's another choice.

The Acadia is a nice boat with upper and lower decks as well as an enclosed heated cabin. Dress warmly even if it's warm on land. We chose to sit on the lower deck as we boarded and we were almost alone for 10 minutes or so until those on the upper deck started coming back down where it was warmer. There were binoculars for rent for $3 and a modest snack bar.

There were 2 naturalists on board one of whom (Gabby) spoke on a speaker system. The presentation was easy to hear and very informative.

Calling this a Sightseeing/Nature Cruise is very appropriate as we saw lots of wildlife. We saw countless ducks, many seals and 7 (yes, seven) bald eagles.

As well as wildlife we got a different view of many of the features of Acadia National Park such as Thunder Hole and Sand Beach. We also sailed by Egg Rock Lighthouse.

Acadian Boat Tours offers discounts for seniors so be sure and ask for yours. 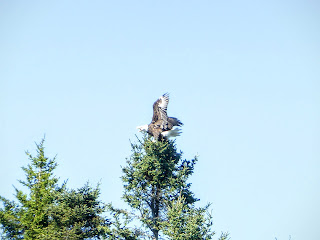 Their web site is here and the TripAdvisor reviews are here.
Posted by Ben Moore at 7:52:00 PM 0 comments

One of the sights in Acadia National Park is Jordan Pond. At that location is Jordan Pond House restaurant. I had read many of the reviews that cautioned about reservations and parking so I set out to mitigate these issues. I used the form on their web site to request reservations. I got the most bizarre response. "At this time we cannot accept a reservation before 3:00 pm. However, we set aside 66% of our seats for walk up guests…" So who gets the other 34% of the seats before 3:00 pm? In a couple of follow-up e-mails I arranged a reservation.

The day before our reservation we took a drive up Park Loop Rd. to scout out the parking situation. It was AWFUL. All 3 parking lots were full with cars circling looking for places. We took Jordan Pond House's recommendation and rode the #5 Island Explorer from Village Green. We arrived 45 minutes early for our reservation and when we checked in she offered to put us in the queue for an early table. We were seated under an umbrella in about 20 minutes. Incidentally these umbrellas are sufficient to keep you dry even in a light rain.

The waitress recommended the Maine Seafood Chowder (which came with a popover) and we took her recommendation. The chowder was good with lots of seafood.

After lunch we took a walk down to the "pond." I'd call it a lake. And then took the Island Explorer back to Village Green. 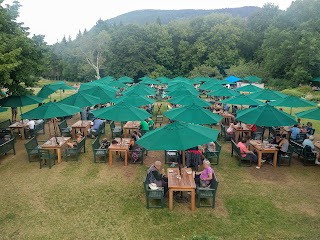 
Their web site is here and the TripAdvisor reviews are here.

I don't usually write posts about a restaurant but C-Ray's Lobster is special.

One of the clerks in a shop in Bar Harbor said about C-Ray's: It's like those places down South. You look for the pick-up trucks and know that the food is good. There were a couple of pick-up trucks at C-Ray's but they were tourists. Still the food and service were awesome.

Don't let the appearance scare you off. C-Ray's operates in a little shack behind a residence on the way into Bar Harbor. There is no indoor seating. You order inside at a refrigerated case next to the live lobster tank and they bring your food out to you. There are some picnic tables with umbrellas but several parties were just eating in their cars.

We got there around 6:00 on a Thursday night and they were already sold out of some of their menu items. The line was literally out the door but moved fast and the food was served quickly as well. There are no indoor restrooms, but there was a portable toilet fully equipped with hand sanitizer.  The staff was very jovial and the crowd was as well. 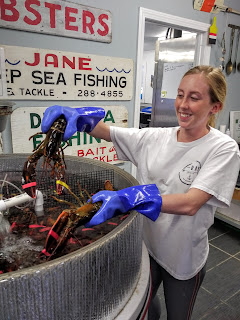 Their web site is here and the TripAdvisor reviews are here.

While I normally don't like guided tours Campobello Island is one of those places where you will benefit from a tour guide. Peter Harwerth runs Campobello Sightseeing (+15067521901). While Peter is a German native he's lived on Campobello for 8 years and knows everyone (all 900 of them).

Peter picked us up at the IGA in Lubec, ME and drove us across the border. While we could have taken our rental car into Canada I felt like it would be easier to have a local escort us across. As expected Peter is on a first name basis with the border guards on both sides.

After we crossed the border we had lunch at Jocie's Porch. Then the gravel road excursion began! Given that the Roosevelt Campobello International Park covers about 1/3 of the island, many of the sites are on well maintained gravel roads. I'm certain that I would have been reluctant to explore them in a rental car much less have known where to go.

Our first stop was Friar's Head where you have a view of Eastport, Maine and back across Friar's Bay to Jocie's Porch.

When we arrived at Liberty Point at the south end of the island a fog was rolling in. It was coming in so thick and quick that you could actually see it blowing by you. The temperature had dropped about 10 degrees (Fahrenheit). While the fog reduced the visibility significantly the local coastline was beautiful with the fog.

By the time we reached the north end of the island it was hot and sunny. Campobello Island has a fascinating micro climate.

But Peter took us everywhere. I love it when a tour guide drives up to a popular location, in this case Head Harbor Lightstation, and says "Don't go that way (to the marked routes) but go this way where the view is better."  Peter had a vast knowledge of Head Harbor Lightstation since he has been involved as a volunteer in the restoration of this facility.

Our final stop was at the Roosevelt Cottage where we had more than an hour to explore. That got us a nice visit in that cottage but If you want to visit the Hubbard cottage you should arrange with Peter for more time there. 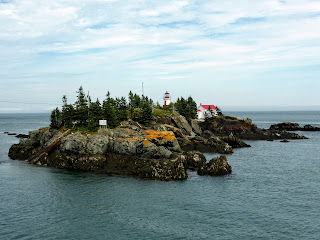 Acadia National Park is the home to a number of sights. We drove from Bar Harbor and made the loop of Park Loop Rd. When you enter the Acadia National Park you have to pay an entry fee (seems like there are LOTS of ways to avoid this though, e.g. Island Explorer bus) but as seniors we qualified for the $10 family lifetime. The road is well kept and mostly one-way. The right lane is sometimes crowded with tourists parked who have walked to sights and trails. We didn't make every stop but some of them that we did, i.e. Thunder Hole, were marked better for the gift shop than the natural site.

The path down to Thunder Hole is treacherous and it doesn't normally make a sound. The locals say that it takes a winter storm to make it "thunder" but that didn't stop the crowd from standing interminably in front of it. The only signage on Park Look Rd directs you to the gift shop and the path down to Thunder Hole is a little hard to find. Hint, it's BEYOND the gift shop on the other side of the road.

Cadillac Mountain is 1500 ft. high but has panoramic views of Mt. Desert Island. There's enough parking there - we only circled once.

Where there isn't enough parking is Jordan Pond. We had checked out the parking the day before and realized that we probably wouldn't be able to find a parking place.  All 3 parking lots were full with cars circling looking for places. 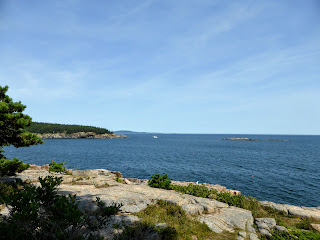 Their web site is here and the TripAdvisor article is here.
Posted by Ben Moore at 7:14:00 PM 0 comments

This is a traditional green area in the center of Bar Harbor. It's surrounded by interesting shops, services and restaurants. There are plenty of benches to rest on and ice cream nearby as needed.

The Village Green is the home of the free Island Explorer shuttle bus service. 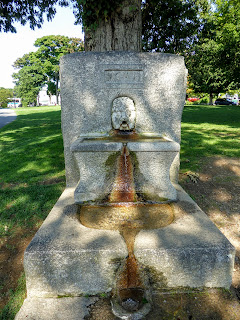 The web site is here and the TripAdvisor article is here.

The Shore Path is a nice walking path just along the shore that I used for my morning walk. The sign says it's a half mile but I started my walk from the door of the Bar Harbor Inn and joined the Shore Path at the Town Pier. Then at the end I turned and walked up to Wayman Lane and returned. That was almost 2 miles.

As you walk there is incredible scenery including Balance Rock. There was even an apple tree with ripe apples on it when we were there. 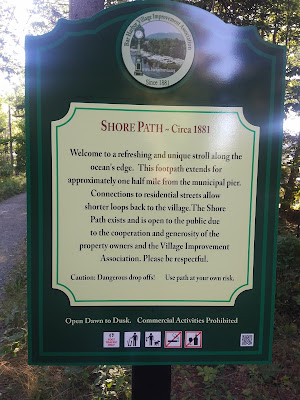 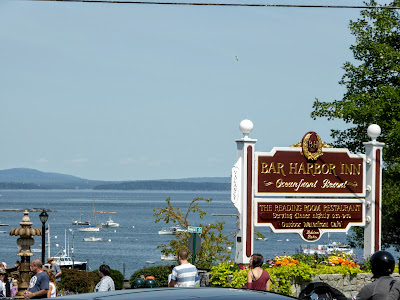 We had a first floor room (109) in the main building with 2 queen beds. There isn't a better view in Bar Harbor. The staff is excellent even providing complimentary valet parking.

We like to be lazy on our vacations and Bar Harbor Inn serves complimentary breakfast until 11:00 which suits our style. It is a couple of buildings away from the main building but with the weather in Bar Harbor you won't mind. One morning I walked over and picked up some fruit and muffins and brought them back to the room.

It's just a short walk up a slight hill to Main St. and any kind of shop or restaurant you would want.

They advertise free Wi-Fi but I had trouble with it the the entire time of my stay. They even brought a hot spot into my room to improve the signal but signal strength was not the problem. Clearly they have some kind of problem with their infrastructure. I tried using my phone's hot spot but the LTE speeds weren't very good either. Set your expectation with the front desk and then just be patient. It's really not acceptable for this level of hotel.

Their web site is here and their reviews on TripAdvisor are here.
Posted by Ben Moore at 7:15:00 PM 0 comments

We flew into Bangor and rented a car. It's less than an hour drive down to Bar Harbor on Mt. Desert Island although the road construction in Ellsworth (it's not often that you see a "Pavement Ends" sign on a state highway") made it feel like much longer than that.

We wanted a great ocean view and that quickly narrowed the choices down to Bar Harbor Inn. Each morning I was able to take my walk on Shore Path passing Balance Rock.

Nearby was the Village Green with the Island Explorer bus stop.

We drove out to Acadia National Park and followed Park Loop Road where we visited Thunder Hole and Cadillac Mountain.

Bar Harbor is less than 100 miles from Canada's Campobello Island, New Brunswick so we made a day trip there.

C-Ray's and Jordan Pond House were special places as well as having good food.

We wrapped up our visit to Bar Harbor with an Acadian Boat Tours cruise around Frenchman Bay.