Washington Square is a park in Greenwich Village. While much smaller that Central Park it is still a nice respite from the hustle and bustle of NYC.

The Washington Square Arch was built in 1892 to celebrate the centennial of George Washington's inauguration as President of the United States in 1789 and forms the grand southern terminus of Fifth Avenue.

The view to the south is of the new World Trade Center.

Serendipity III is a restaurant located at 225 East 60th Street, between Second and Third avenues in New York City. The restaurant has been the scene of several films, including the 2001 romantic comedy Serendipity.

The restaurant offers a full menu but is well known for its foot-long hot dogs and frozen drinks, particularly its trademark "Frrrozen Hot chocolate". The restaurant has constantly been ranked as a favorite among Manhattanites, tourists, and celebrities.

Times Square is an American icon.

There web site is here and the wikipedia article is here.

The picture below is of the ball that drops on New Year's Eve.

In my previous post on Cleopatra's Needles I had only seen two of them. Now I've completed the trifecta. 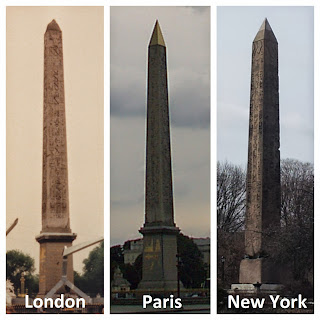