In Victoria there was some issue with Canadian Immigration and we sat on the ship a long time before they let us disembark. They even locked down the stairs and elevators. We just took the city bus excursion from Celebrity. Really not much to see in the city but we didn't want to take the longer ride out to the Butchart Gardens. Dinner that night was a problem since we were supposed to disembark at 6 and we didn't get back on the ship until after the restaurants had closed. The main dining area is open 24x7 so we ate there that night. We could have gotten off the bus in town and eaten and taken the city shuttle back to the boat for $2 each.

Their web site is here and the wikipedia page is here.

In Skagway we took "City and White Pass Summit" from Shore Excursions Group for 2:30 hours leaving at 8:00 AM. This was a good bus ride and we went into Canada for a mile or so. Lots of other people took the train ride and went to the first town in Canada. Most of them saw bears. We didn't.

The bus driver recommended that we have lunch at the Skagway Brewing Company. They don't start serving food until 11:00 AM but you can drink until then.

Their web site is here and the wikipedia page is here.

In Juneau the Solstice didn't dock but had to be tendered into the city. While we were supposed to "arrive" at 1:30, Celebrity didn't start handing out tender tickets until 1:30. Passengers who had made shore excursions with Celebrity got the first tenders regardless of their schedule. We got tickets in group #2 and didn't board the tender until 2:30.

We had no trouble finding our ride for "Helicopter Icefield Excursion" from Shore Excursions Group but the weather closed in and while we flew over Hubbard Glacier we couldn't land. They gave us a full refund.

We met an old friend and had dinner with him at Hanger on the Wharf.

After Ketchikan, we sailed up the Tracy Arm Fjord. At the end of it you see the Sawyer Glaciers. It's incredible as you sail up the fjord negotiating among the huge ice floes. Occasionally you'll see blood on a floe where some predator has enjoyed his dinner.

We discovered the outside observation deck at the forward end of the 12th deck on the Solstice. You access it through the spa.

Our first port was Ketchikan. Ketchikan was to be the home of the "Bridge to Nowhere" that would connect Ketchikan to Gravina Island across Tongass Narrows. Ketchikan receives an average of 153 inches of rain per year.

While there we took the the "Lighthouse, Totems and Eagles" cruise from Shore Excursions Group. They met us literally at the end of the ramp from the Solstice. We left at 8:00 and returned at 11:15. It was not clear from the web but after a bus ride the rest or the excursion is on a boat. It's a real authentic tour on an old boat (24 people capacity). They offer free snacks and drinks. They stop several times for photo ops and the crew will take your picture for you.

The bus driver recommended us to Annabelle's just across the street from the pier. We tried it and it was great food and service.

Our cruise on the Celebrity Solstice sailed from Pier 91 in Seattle. Pier 91 is a couple of miles northwest of the Space Needle. We took a town car to the pier. The Solstice staff grabbed our luggage (with tags) and quickly disappeared. We were had Aqua Class passage so we skipped the long lines and were aboard the Solstice in 15 minutes.

There is a wonderful view of the Seattle skyline and Puget Sound from atop the cruise ship.

Email ThisBlogThis!Share to TwitterShare to FacebookShare to Pinterest
Labels: Washington

The Soltice's occupancy is 2,850 guests and approximately 1,250 staff. It weighs 122,000 tons and is 1041 feet long. It cruises at 24 knots. When Celebrity Solstice was launched in 2008, the Solstice was the largest cruise ship ever built in Germany. The wikipedia article on the Solstice is here.

Here is a set of deck plans for the Solstice. 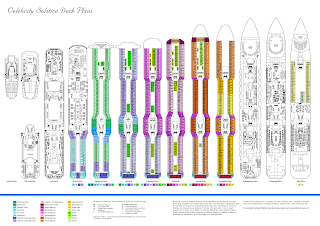