While we were visiting with the hostess at The Gallery at Monteagle, we asked her for a recommendation for dinner. She was quick to respond with the High Point Restaurant.

We didn't think we needed to make reservations on a weeknight in Monteagle, TN but we were surprised by the crowd. We got in with no trouble but I would recommend reservations just in case.

The local legend of the High Point is that Monteagle is the mid-point between Chicago and Miami, Al Capone would travel from Chicago to Miami stopping overnight in Monteagle. He built the house that is now the High Point Restaurant  The legend goes on that there are escape tunnels underneath and a light fixture that was illuminated to warn the local law enforcement that Capone was in residence.

Whatever the history is the food and service are extraordinary. 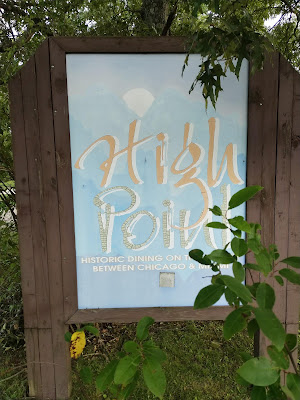 Email ThisBlogThis!Share to TwitterShare to FacebookShare to Pinterest
Labels: Monteagle

The Gallery at Monteagle

We collect McCarty Pottery. This has resulted in us making many trips to Merigold, MS. Harder still to acquire is the McCarty Monteagle Plate. 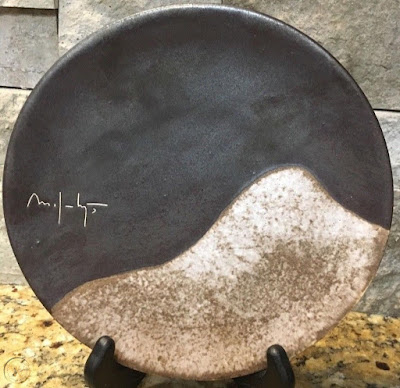 The back story is that the McCartys used to summer at the Monteagle Sunday School Assembly. They would take their pottery with them and offer it to the other residents. Lethia Watson had a cottage nearby and collected McCarty pottery. When the McCartys got older and sold their cottage, Lethia offered to keep a small collection of pottery on hand for other residents. She converted her back porch into a small gallery. In recognition of this the McCarty's created a unique plate known at the Monteagle Plate. The Monteagle locals call it the Mountain Plate. Lethia died several years ago and a local resident now operates the Gallery.

We made an appointment with the Gallery and drove to Monteagle. The Monteagle Sunday School Assembly is a gated community. When you stop at the gate and tell them what you are there for they give you a map to get to the Gallery.

The hostess was sitting on the front porch when we arrived. We had a wonderful visit with her and she walked us through the cottage. Normally you enter the Gallery using the back porch steps. Going through the cottage you can see much of Lethia Watson's collection.

You are only allowed to buy 1 plate but as there were 2 of us we bought 2. These were the last 2 plates in stock. The next day the hostess' husband was driving to Merigold to restock.

We stayed at the nearby Sewanee Inn and had dinner at the High Point Restaurant. 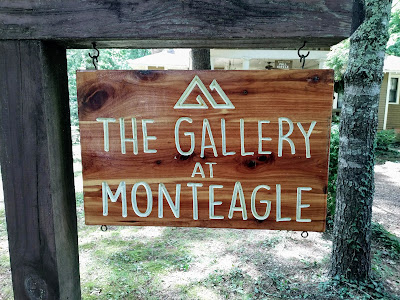 In 2018 we went to the Mississippi Gulf Coast but were chased away by the threat of a hurricane. The one day we spent there we were in Ocean Springs.

In 2019 we tried again, basing ourselves out of Ocean Springs.

In Ocean Springs we stayed at The Roost. It's one of the oldest houses in Ocean Springs that has been converted into a botique hotel. Our room was The Lily. It was on the ground floor next to the office. It had a nice living room, a kitchenette, and a bedroom with a king-sized bed. The bathroom had a spacious walk-in shower but not a tub.

The old depot has been converted into Realizations, the Walter Anderson shop.

If you exhaust the restaurants on Washington, there are plenty more on Government Street and Desoto Street.

In Ocean Springs, we dined at Mosaic, Maison de Lu, Lancaster's, and Buzzy's Breakfast Joint. We shopped at Realizations, Poppy's, and Coastal Magpie.

We took one day and visited Biloxi and Bay St. Louis.

We drove down to Biloxi and toured Beavoir, Jefferson Davis' home. Nearby we had lunch at Shaggy’s which is next to South Beach Biloxi Hotel where we stayed previously. We had dinner at Mary Mahoney's.

We rode down Highway 90 to Gulfport and shopped at Martin Miazza Gifts. We went on to Bay St. Louis and had ice cream at Creole Creamery.

The beaches were eerily vacant as there were red flags out along the entire length due to the algae. We only saw 3 people on the beach on the entire trip and they weren't in the water. 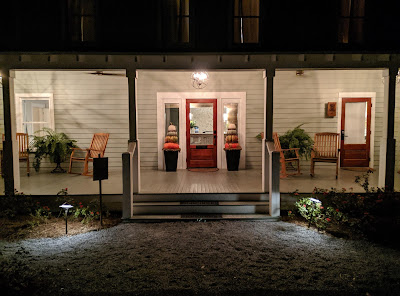 While we were in Biloxi we took a day trip to Ocean Springs, just down US 90. Our objective was to see all we could of Walter Anderson's works.

Our first stop was The Walter Anderson Museum of Art. Besides all the history and art works the docents are incredible. Be sure and look up and see Walter's old bicycle. The museum adjoins the Ocean Springs Community Center which is literally wall-to-wall murals by Walter Anderson.

Just down the street is Realizations. This is a shop dedicated to Walter Anderson's works. You can buy his black and white prints or chose from a extensive selection of colorized works by local artists. While we were shopping his daughter dropped by!

After a delicious and relaxing lunch at Salvetti's Italian Grill (now closed) we drove out to Shearwater Pottery. This was started by Walter Anderson's brother, Peter. It is still run by family. It's a must see. 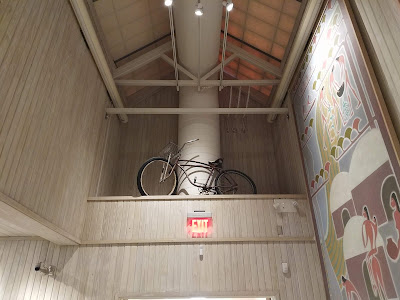 We wanted to take a quick trip (little did we realize how quick it would be) to the beach. The Mississippi Gulf Coast is just under 6 hours away so off we went.

One of our criteria was to be ON the beach. Other than the casinos the only thing we could find on the beach side of US 90 was South Beach Biloxi Hotel and Suites. The reviews were spotty at the time but nothing can beat the location. It seemed that most of the negative reviews were regarding a renovation that had been done.

It certainly isn't a 5 star facility but if what you want is beachfront, this is the place to stay. Our room had a partial beach view. If you go for that ask for it to be on the west side as the east side overlooks a bright pink ugly building. The westerly view is a parking lot but you can see the sunset over the beach. We had a small private balcony with 2 chairs and a table.

The first couple of floors are parking. Getting in there was spotty but there's that nice parking lot just to the west.

There's a good enough (and free) breakfast and a laid back bar that we never used.

But the best thing is that you walk out the back of the hotel onto the beach! Actually there's a wonderful boardwalk between the hotel and the beach and hotel supplied beach chairs on a private deck with beach music playing.

There are several local joint places in easy walking distance for drinks and food.

And of course I had to visit the Biloxi Lighthouse.


Hurricane Florence caused us to leave early. It never really hit the Gulf Coast but all the restaurants and businesses closed so we went home. 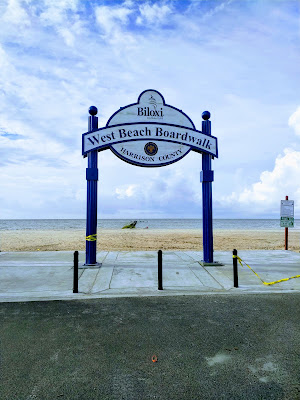 We visited the Atlantis resort which is on Paradise Island just off of Providence Island where Nassau is.

Google Maps describes Atlantis as "Expensive beach resort with a water park." Expensive it is but they really deliver. There are other facilities on Paradise Island but Atlantis dominates it.

There are five hotels that are part of Atlantis. We stayed at The Reef which is family oriented.

TripAdvisor's review is here. The wikipedia article is here. 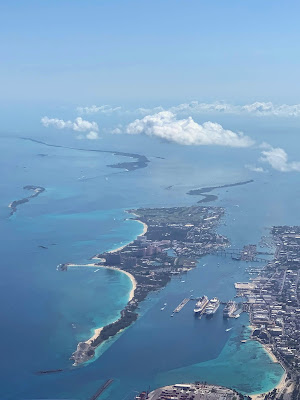