Less than a kilometer from the Spanish Steps is the Trevi Fountain. Both times we were there the whole area was absolutely packed with tourists.

On the southeast corner is a church. Climb the steps and you'll have a slightly better view as you'll be above all the tourists.

The wikipedia article is here and their web site is was here. 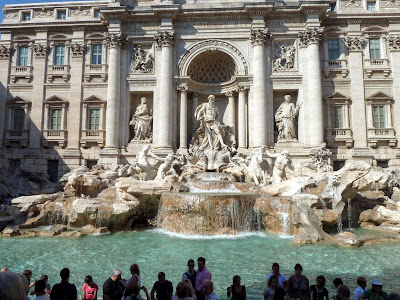 After the guided tour of the Colosseum and the Forum we took a taxi to Spanish Steps for 10€.

While the Spanish Steps are awesome, I had never heard anybody mention the beautiful fountain at their foot.

While there we played a little "Where's Waldo?" 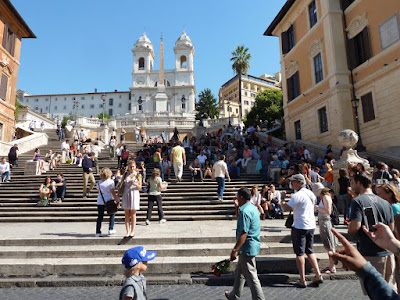 As I mentioned previously we took a combined Colosseum and Forum tour from Tickitaly . It was well worth having a guide in the Forum as so much is just piles of rubble. A guide really makes it come together. 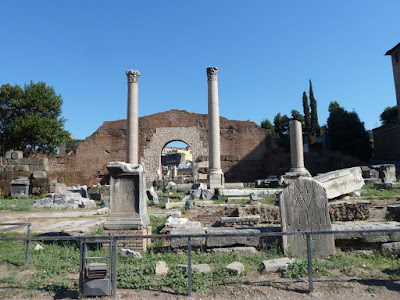 What can I say about the Colosseum that hasn't been said? Oh, have you had the Colosseum Underground tour? No? Then there's lots.

In 2010 they opened what is called an subterranean tour. Besides the underground part, It actually includes visiting the top of the Colosseum that is not normally open to tourists. It is a different ticket than normal, limited in volume and subject to weather. ABC News has a good article on the tour here.

As we had been through the Colosseum before my wife didn't want to go back. Previously though we hadn't been through the Forum as it is so rambling we didn't know what we were seeing. I finally negotiated with her that she would go on the Colosseum underground tour if we could get a tour guide for the Forum. We booked a tour with Tickitaly that was wonderful. It cost 67€ for both of us.

By the way the meeting place is right here but the tour guide was not easy to spot.

Incidentally Tickitaly has a good article on the Colosseum here.

We walked from our hotel to the Colosseum that morning as we had heard that there was a transportation strike planned for that date. Interestingly the Roman transportation strikes start after everybody gets to work and are over before they get off so as to not disturb the workers. Only in Rome! There's a subway map here. 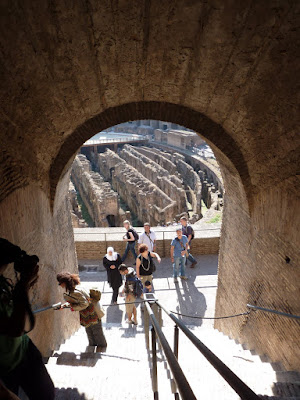 We stayed at the iQ Hotel Roma at Via Firenze n. 8. This is literally across the street from the Rome opera, Teatro dell'Opera. Often we would hear the orchestra. The iQ Hotel is new and very nice. While the lobby is air-conditioned the rooms are not but were comfortable when we were there in early October. There are reasonably priced vending machines available and a nice roof terrace. There is free (for guests) Wi-Fi available throughout the building.

Their web site is here and their write-up on TripAdvisor is here.

We decided to avoid the taxis at Rome's Fiumicino airport and booked a limo with Rome Shuttle Limousine for 40€. That is actually less than taxi fare and we had a driver waiting for us in the arrivals lounge and a shiny new black Mercedes to the front door of the hotel. I strongly recommend this. Rome Shuttle's web site is here. We also used Rome Shuttle Limousine on our departure from Rome to Cinque Terre as it was much cheaper to book a rental car round trip from Fiumicino than to pick it up in Rome and drop it back at Fiumicino.

We had stayed in this area of Rome on our previous trip at Welcome House at Via Nazionale, 230. It appears that they are no longer open. No great loss.

This area is very near Termini station and we again took bus #110 for an orientation ride. The write-up on TripAdvisor is here. Don't be swayed as you walk toward the train station. The sidewalks are full of booths offering bus tours. Most are actually more expensive than the 18€ per person for #110. The #110 tickets are valid for 48 hours so we actually used it instead of a taxi for 2 days. It was not always the most direct route but it was dependable and familiar. The downstairs seating section, while not a good viewpoint, is air-conditioned. From the upper section the view was more exciting.


Someone later made fun of us for buying the #110 tickets. She said that nobody pays to ride the buses. Still navigating the bus routes was too much for us. Another piece of advice she offered was to make sure that the taxi drivers don't have the meter set on zone #2. Every ride in the center city should be zone #1 which is cheaper.

One night we had dinner at nearby Ristorante del Giglio Via Torino, 137 for 60€. Their web site is here.

We often found ourselves here having gelato at the end of a long day. It is so European to sit at a sidewalk table and enjoy ice cream. 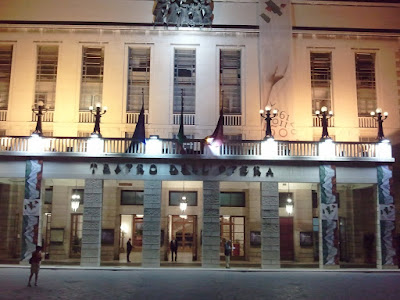