Mackinac Island has been on our list for a long time. Cars have been banned on Mackinac Island since 1898. There are more horses on the island than people. More veterinarians than doctors. The taxis are radio dispatched carriages. Bicycles are used by the porters for the hotels. The island does have a distinct aroma.
Mackinac Island is hard to get to. After our exciting return trip from Edinburgh, we wanted something simpler. We flew from Memphis to Detroit with no checked bags and drove to Mackinaw City. We took the Star Line Ferry over to Mackinac Island. We bought tickets for the ferry online but we should have pre-paid for Self Park Secure parking as well.
The ferry ride is less than 30 minutes and you arrive in the center of the business district on Mackinac Island. The porters for the hotels will pick up your baggage and beat you back to your hotel. Take your time strolling down Main St. sampling the fudge.
We stayed at the Harbour View Inn. While it was a perfect location, I'll let you read my Tripadvisor review for the details.
We dined at several of the finer restaurants including The Pink Pony, the Carriage House, and the 1852 Grill Room. All three of them were exceptional. Reservations are pretty much mandatory.
We also dined at some of the more casual restaurants including Bill's Grill and Mighty Mac's. Like the finer restaurants, the food was great but no reservations were necessary. If you need incidentals, try Doud's Market.
We took the Mackinac Island Carriage Tour. That tour gives you insights into the island that you won't see from Main St. The waiting line looked long but it moved really fast. The tour is, of course, on a horse-drawn wagon. Once you get away from Main St., Mackinac Island is somewhat hilly so the horses kept getting swapped for fresh horses. There are a number of stops and 3 choices of how to exit the tour. Be sure and ask your driver where they're from. One of ours was from Romania and another was from Arkansas.
We elected to depart the tour at the Grand Hotel for ice cream and took a taxi back to our hotel.
The Grand Hotel is a destination in its own right and we returned the next day. There's a $10 charge for visiting it but it's well worth it. There are interesting shops and incredible views along the 660 ft. front porch. We had drinks in the Cupola Bar with a beautiful view. 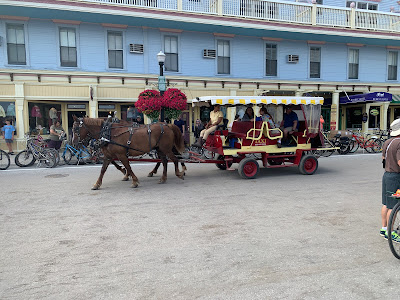 Email ThisBlogThis!Share to TwitterShare to FacebookShare to Pinterest
Labels: Islands

I ran a dashcam for the entire trip in 2022. Here are some of the highlights.

Here's a map of where we went in Ireland. I didn't capture the last day's drive back to Dublin.
I used my old Motorola Moto X and GPS Logger app.
Zoom in and you can really see some details.
Posted by Ben Moore at 7:38:00 PM 0 comments

Email ThisBlogThis!Share to TwitterShare to FacebookShare to Pinterest
Labels: Ireland

Our hotel, Cheval Old Town Chambers, was in the middle of the Royal Mile connecting Edinburgh Castle and Holyrood Palace. When you walked out the front door, you were in the middle of the Scottish Bourbon Street!
From one end to the other of the Royal Mile were shops, restaurants, street performers, medieval landmarks, everything!
We started our time there with a great walking tour by John Mowbray. It was tailored just for us particularly considering the 2 girls and the several senior citizens. We covered some of the Royal Mile near our hotel and then proceeded down the hill to the Old Town.
Grassmarket has a open air market and more shops and restaurants. John shared all the backstories on the sites along the way, e.g. The Last Drop and Maggie Dickson. Then to Victoria Street.
One of the most interesting sites was Greyfriars Kirkyard (cemetery). There were several graves there related to the Harry Potter story and "Greyfriars Bobby." Bobby was a dog who sat guard at his owner's grave for 14 years.
We weren't able to visit Holyrood Palace as there was a royal in residence and visitors weren't allowed. Maybe next time.
From our hotel, Edinburgh Castle is UPHILL to get there and then more UPHILL inside.
The one thing I wanted to see in the castle was the Coronation Stone. My first viewing of it was under the Coronation Chair in Westminster Abbey in 1990. In 1996, the British Government returned the stone to Scotland. It was taken to Edinburgh Castle where it is now kept with the Scottish Crown Jewels. Then when I visited Westminster Abbey in 2003, it was no longer under the Coronation Chair. So I wanted to close the circle and see the Coronation Stone in its new home.
I checked that box. Unfortunately you couldn't take photos there so you'll have to take my word for it.
Around the corner and down the hill from Old Town Chambers is Cockburn Street. There are pharmacies (drug stores), pubs, and best of all gelato shops. We spent a lot of time on Cockburn Street.
There's WAY more information on my daughter's post. 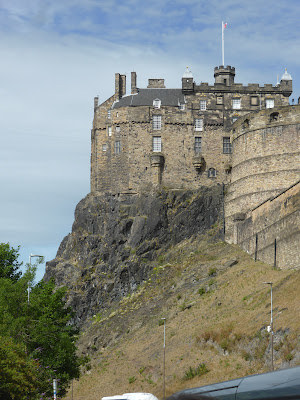 So much of our trip was a semi-repeat of previous trips to Ireland that we wanted to add another country. Why not Scotland? After all, it's nearby.
Pretty much knowing nothing of Scotland we decided to just focus on Edinburgh.
John Mowbray met us at the Edinburgh airport and transported us to Cheval Old Town Chambers. Talk about being in the MIDDLE of everything. We were at the mid-point of the Royal Mile. If we could have just put a pin in a map as to where we wanted to stay, that would have been it.
As noted earlier, we had started planning this trip in 2018 for 2019. From 2018 to 2022, the Old Town Chambers has changed hands but the staff and facility were unchanged. Oh, it had been renovated so it was very fresh and up to date.
Old Town Chambers is a collection of buildings with walkways between them. These walkways traverse welcoming open areas, one with a nice restaurant/bar. The interior hallways wander up and down and around inside the buildings. My son-in-law said that being the architect for those buildings would either be fun or a nightmare.
We had two 2-bedroom suites each with 2 baths, a den, and a laundry area. They were just across the hall from one another. They were incredible accommodations with a staff to match.
You can tell from this photo of the elevator panel that that part of Edinburgh is quite hilly. 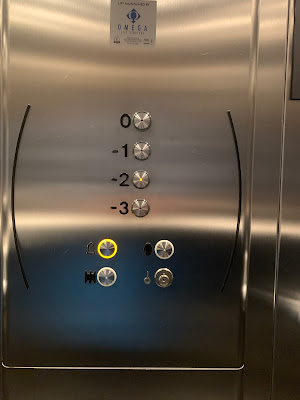