The nearest town to the Galley Head Lighthouse is Clonakilty. It's a pretty town of just under 5,000 and has a number of nice restaurants and shops that we took advantage of while we were staying at the lighthouse.

Michael Collins, who was the Director of Intelligence for the IRA, lived in Clonakilty and attended the local boys' national school. He is widely regarded as one of Ireland's leading historical figures. He gave many an oration from O'Donovan's Hotel on the Main Street of Clonakilty.

The Church of the Immaculate Conception (Catholic) is a large building in Early French Gothic style, designed by George Ashlin and completed in 1880. There is also an old Presbyterian Church, built in 1861, taken over and used since 1924 as a local Post Office, but still fully retaining its former outward appearance as a church, The local lore is that a pastor of the Presbyterian Church liked the Catholic community so much that he converted to Catholicism and the Presbyterian Church closed. This is, after all, NOT Northern Ireland. 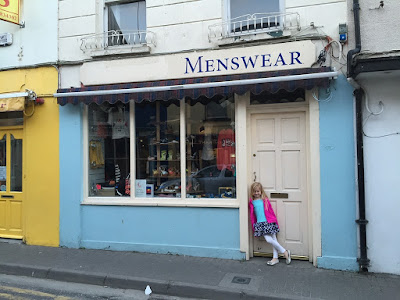 We needed some time for our granddaughter to unwind so we found Red Strand Beach just across from the Galley Head Lighthouse.

It's a nice sandy beach with mostly family bathers. Well, in May only the younger children were actually in the water.

Their web site is here. There is more information here and here. 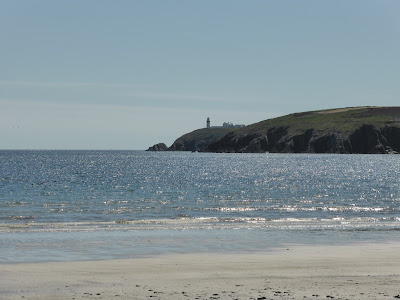 We had visited the Galley Head Lighthouse previously. When I got home and researched it I discovered that the lightkeeper's house could be rented from the Irish Landmark Trust (ILT). Although their web site said that the minimum rental is 3 nights they did let me rent for 2 nights. Their web site said that they would only allow as many residents as there were beds, i.e. 4 for each of the 2 units. Since there were 5 of us traveling we rented both units. When we arrived the manager said that he could have gotten us a cot but I'm glad we rented both units.

The e-mailed documentation from the ILT was comprehensive and accurate. Payment is via credit card over the web in advance. There are separate managers for each unit. You are required to contact the respective manager 4 days before arrival to arrange for checkin. e-mail and phone numbers were provided. I e-mailed them and both promptly responded. Both had the surname of Butler but the contact information was different.

When I heard back from them, Ger Butler, the manager for Unit 2, responded that he would handle the checkin for both units and to just call him when we arrived in Clonakilty. We were 15 minutes later than we expected but he was there to welcome us.

It turns out that the other manager is Ger's sister-in-law so combining the checkin was no problem. Ger just lives about 5 minutes away.

We were ALONE on the headlands.

My son-in-law's family is from the immediate area and he still has relatives there. Ger knows my son-in-law's relatives. Due to that "connection" the manager gave us a tour of the actual lighthouse. That was a once in a lifetime experience.

His father was the lightkeeper and Ger and his 14 siblings grew up there! He said that as they slept 4 to the bed, cold was never a problem. I asked him which room had been his and he said he had slept everywhere.

At that time the structure was divided into several areas. The westernmost room is now the kitchen for Unit 2. Previously it was an oil room. The breakfast table in this kitchen has the best view in the houses. The 2 units were separated and the principal lightkeeper lived in what is now Unit 2 and the assistant lived in Unit 1. When Ger's father was promoted, they had to move from Unit 1 to Unit 2. Eventually with automation there was only one lightkeeper and there was a door cut between the units and his family had access to both units.

There is an enclosed corridor from the houses to the lighthouse. Today it has the electronics for the cellular towers. When we asked Ger what it had been used for previously he said that it provided a protected walkway from the houses to the lighthouse for safety in the winter winds. He showed us the worn marks on the stair posts where they wedged a board to keep the door from being blown open by the winter winds. He ought to write a book.

Each unit has 2 bedrooms, one with a double bed and the other with 2 twins. Each unit has a large den and a large kitchen. Unit 1's kitchen is slightly bigger and has a larger breakfast table. Both have complete appliances including oven, stove, small refrigerator/freezer, dishwasher, microwave, cooking utensils and china and flatware. Ger said there was a washer and dryer in a house outside but we didn't use these.

The feeling of the interior is like a nicely refinished farm house filled with antique furniture and games for the whole family. The floors are wide boards and freshly painted. I had read on the Internet other visitors' stories about having to learn how to operate the heating. During our visit the heating was by radiator and programmed automatically. We never had to operate or change the heating.

Don't worry about the light from the lighthouse keeping you awake. There are heavy solid shutters on every window. But the beam of light is substantially above the house so the light is not a problem.

I had also read that there was no cellular service at the lighthouse. That demonstrates the construction of the structure. There are numerous cell towers nearby including several ON the lighthouse proper. The problem with cellular service is that the outside walls of the structure are 30" thick effectively blocking the cellular signals when inside. Even if you stand at a window you need to try several windows to get one that has exposure to the cellular carrier you need to use. Standing by the window in the bathroom on the north side of Unit 1 I only got EDGE signal and actually couldn't make a phone call. I walked out of the bathroom and stood by the window at the top of the stairs facing south towards the lighthouse and got HSPA+.

Similarly the inside walls block Wi-Fi signal. I had rented a Vodafone hotspot from Hertz. Even when I placed it near a window where it could see the appropriate cellular tower the Wi-Fi signal wouldn't penetrate the house. It was in Unit 2's foyer and I couldn't see it from Unit 1's bedroom.

Remember that the units are "self catering" and come prepared. Assume that you need to bring everything. We rented both units and found 1 hair dryer in Unit 2. We went into Clonakilty and grocery shopped. Ross Carberry is about the same distance. Beware that the roads are NARROW. On the road up to the lighthouse ignore the "Private Property" sign. There are 2 locked gates that the keys to the units will open. Be sure to lock them behind you to keep out the sightseers. Even with them locked we had a group of tourists walk up. They weren't any trouble and I didn't blame them for seeking that view.

The drive into either Clonakilty or Ross Carberry is about 10 miles of mostly one lane roads. The last mile into the lighthouse is full of potholes. I found a GPS indispensable although it generated different routes going into Clonakilty as opposed to coming from Clonakilty to the lighthouse.

Be sure and let Ger share his incredible knowledge about the history and operation of the Galley Head lighthouse and the other lighthouses in the area. That won't take much prodding. Ger himself worked for the Commission of Irish Lights for 21 years.

I had seen information on the Internet that said that the Galley Head lighthouse was going to be turned off. Ger said that that wasn't true. At some point in the future it will be converted to an LED light source. This will greatly simplify the operation as the LEDs won't have to rotate, just blink. When I asked him when this would happen he said that it would happen when he ran out of bulbs! He said he had 6 spares now. He said that due to the fees from the cellular towers that the lighthouse is actually a money maker.

The light on Galley Head blinks 5 times every 20 seconds. It is painted white with a black ring just under the lights. This is the signature of the Galley Head lighthouse. The black ring was added some years ago to hide the discoloration running down from the catwalk around the lights. When this was done the Commission of Irish Lights had to notify all seamen.

The drive up to the lighthouse is quite an experience.


Here is the tour of the lighthouse.


The sign says stay off the cliff wall. There's a reason for that. 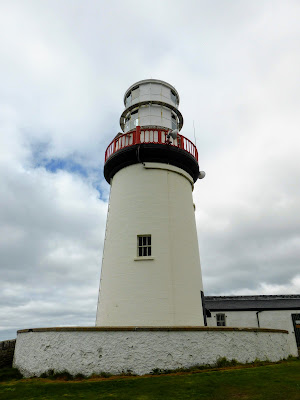 The first time we were at Blarney Castle it was a monsoon. I actually threw away my shoes. On this visit the weather couldn't have been nicer.

The line to kiss the Blarney Stone was too long but we enjoyed the caves and gardens on the grounds.

Another tradition holds that, in gratitude for Irish support at the battle of Bannockburn (1314), Robert the Bruce gave a portion of the stone to Cormac McCarthy, king of Munster. Installed at McCarthy's stronghold, Blarney Castle, it became the Blarney Stone. 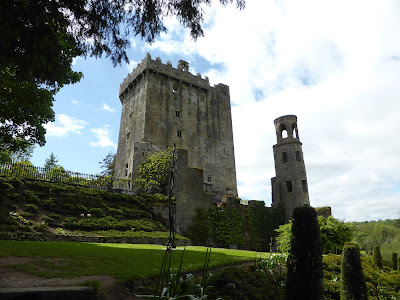