As you walk along Rue Saint Louis heading from Rue d'Auteuil toward Château Frontenac you'll pass a small cul-de-sac known as Rue du Corps de Garde. In the tiny opening of this cul-de-sac stands a huge elm tree. Entwined in its roots is what looks like a cannonball.

The story as told by the Québec newspaper is that this is actually an ancient bomb. It was probably fired into Québec by the British in 1759. It didn't explode and was later used in the early 1900s to prevent wagons turning into the cul-de-sac from striking one of the buildings.

An elm tree sprouted in the cul-de-sac and eventually spread its roots around the bomb. 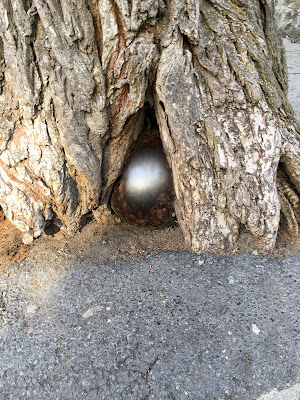