The trail between Manarola and Riomaggiore is known as the Via dell Amore (The Way of Love). It is a gentle flat walk (excluding the climb at the train station in Manarola).

Walking at a steady pace you could probably make the trip in less than 20 minutes but trust me you'll stop again and again enjoying the views and the buskers.

The Smithsonian has a nice article by Rick Steves here.

The trail was built as part of the construction of a train tunnel in the 1920s. Before the trail was opened it was a long and difficult journey between Manarola and Riomaggiore. So much that the two villages even had different dialects. 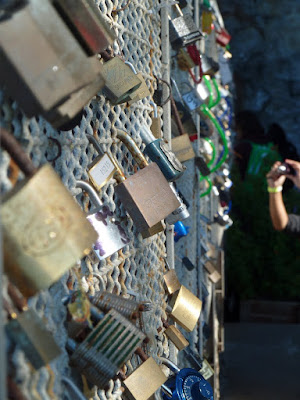